An anti-gun agenda in Batman being controversial.

reblogging this to my art blog because.

People don’t know about the Batman. 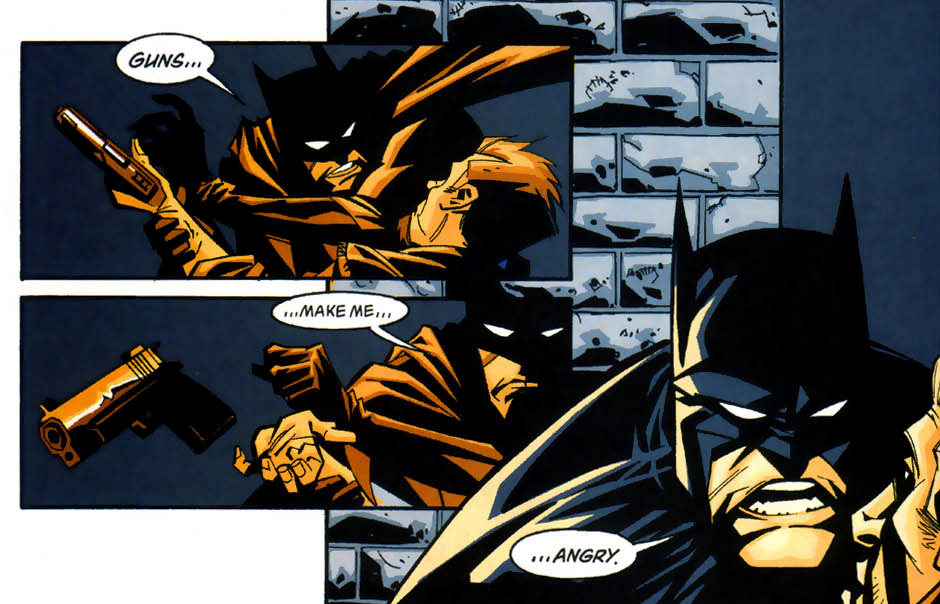 Yes, because Bruce definitely does not have his own anti-gun agenda. CLEARLY.

For anyone who watched “Batman: The Brave and the Bold,” the Batmite finale had a whole thing on this – Batman NEVER EVER uses a gun. Nobody tell his right-wing fans about that…

The whole thing about him and guns stems from his parents’ murder. like jesus fuckin christ people.

In the very, very beginning, Batman used guns. He had a belt with a holster for the one he used and everything.

… However, that Batman ALSO found murdering villains so acceptable that he quipped whenever he did it, even when there wasn’t a need for murder.

Both of those things changed when the Comics Code Authority got in the mix. Batman had to lose the gun as well as his dark, murderous aspects to appease the government and concerned parents that thought comic books caused juvenile crime and (gasp, the horror) homosexual tendencies!

Batman slowly regained his dark edge starting around the 70s, but in the process, writers took time to really think about and understand the psychology you’d expect from a man whose parents were shot to death in front of his eyes as a child. That psychology being: why the hell would he want to use the weapon that brought him so much suffering? And why would he want to kill people if it wasn’t necessary?

Technically, Batman does use guns… on his vehicles. Or when a situation calls for it. But it’s not to kill, it’s as a tool, such as disabling a car or tearing down a wall. It’s rare for him to actually use a gun for its typical purposes, and he only does it if there’s absolutely no other option. It’s the “you know shit is getting serious when Batman has to resort to that” scenario, and it only has that power because he HATES using guns and rarely does so.

For Batman, guns are bad. He’ll acknowledge that they have their uses, but he never loses sight that guns are terrible, terrible things that would be better off not existing. Being able to disable a vehicle or break down a wall with guns does not override all the people guns kill.

View all posts by salarta